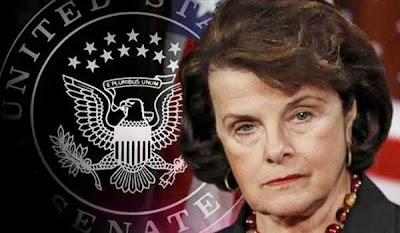 On Monday morning, October 28th, I read the news that United States Senator Dianne Feinstein is drafting legislation that will provide a supposed legal basis for the United States Government to spy on all of us, and to collect every email, text, voice communication, Instagram photo, and similar messages that you, I, and terrorists everywhere are sending and receiving. Maybe even our Morse Code messages. The news story wasn't very clear about Facebook, but I bet the Senator has got that covered.

First Point, Senator: It is not within the legal power of the United States Congress to abolish the Fourth Amendment, or to enact laws that violate it. In case you may have missed it, that significant provision in our Bill of Rights says this:


The right of the people to be secure in their persons, houses, papers, and effects, against unreasonable searches and seizures, shall not be violated, and no Warrants shall issue, but upon probable cause, supported by Oath or affirmation, and particularly describing the place to be searched, and the persons or things to be seized.

It is true that the Founding Fathers didn't use electronic media to communicate. They used pamphlets. So, anyone opting for a "strict constructionist" view of the Constitution might be able to make the case that the Fourth Amendment has nothing to do with electronic spying. If the Supreme Court were to make this ruling, we would be forced to conclude that those Constitutional protections in the Bill of Rights weren't even worth the paper they were written on. At least, that's the conclusion I would reach. That is what I would expect my Legal Studies students at the University of California at Santa Cruz to conclude, too.

Point Two: Under our Constitution, "reasonable" searches are permitted. That has generally been held to mean that the government has to demonstrate (to an independent judge, before any search or seizure actually occurs) that there is "probable cause" that the search or seizure will uncover or otherwise be linked to wrongdoing of some kind.

But that isn't the Senator's proposal. Her idea is to seize "everything" (every communication), so these communications can be "searched" later, should the need arise. There is no "surveillance," according to the Senator, because the government isn't actually going to read our communications. Unless they want to!

Here's the Senator outlining her thoughts:

I do not want to leave the United States in a position where we are open to another major attack because we can't ferret out who terrorists might be calling in this country to put it together.

As far as I know, none of my Facebook Friends are terrorists, but I could be wrong. If there are terrorists among the number of those with whom I communicate, I think it is alright for the government (upon a showing of probable cause, of course) to undertake surveillance on the communications of those terrorists, and I don't really object to the fact that this might lead to some of my communications to them being swept up in such an operation.

But I do object to my other communications being collected and (at least potentially) reviewed. Not unless there is probable cause to seize and examine them. It is my bet that a vast majority of the  more than 300,000,000 other American citizens feel just the same way.

It seems to me that Senator Feinstein is willing to throw out the Bill of Rights.

Time for a new Senator from California.