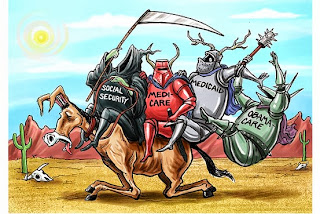 Daniel Henninger, who is deputy editor of The Wall Street Journal's editorial page, writes a column called "Wonder Land." He has put out a call for a social revolution in a recent column titled "Let ObamaCare Collapse." I was particularly intrigued by this statement:

Congress can't kill the entitlement state. Only the American people can.

The "entitlement state," for Henninger, seems to be a kind of "state of mind," more than anything else. Or maybe it's a "state of affairs," in which the people of these United States have determined to use their governmental institutions to help make sure that certain basic human needs are addressed, on behalf of all the individuals in the society who can't take care of these things for themselves. We are talking about things like food, shelter, and health care. When people don't provide those things for themselves, it is almost inevitably because they lack what Woody Guthrie used to call the old "Do-Re-Mi."

Social Security and Medicare are both identified, specifically, as part of the "entitlement state" that Henninger wants us to dismantle. You can deduce this from the cartoon that graced Henninger's "Wonder Land" column on September 25th. The cartoon is reproduced above.

The Wall Street Journal isn't the only publication calling for an end to the "entitlement state." Forbes has a similar view, and has printed an article by members of the Ayn Rand Center that opines that things were a lot better before that "entitlement state" came into existence. When was that, by the way? I think the Forbes folks mean mostly after the Great Depression, which wasn't really a great time at all, at least according to my parents, who lived through it.

It all makes you wonder: If Americans could thrive without an entitlement state a century ago, how much easier would it be today, when Americans are so rich that 95 percent of our “poor” own color TVs? But we won’t get rid of the entitlement state until we get rid of today’s widespread entitlement mentality, and return to a society in which individual responsibility is the watchword.


The key for the Ayn Rand Center-Forbes contingent is that "individual responsibility" is the way that we can find an alternative to the "entitlement state." And Henninger agrees. It's only the "American people" who can kill the entitlement state, as he sees it.

Since the political actions of the "American people" created our system of social security - what the elite writers are calling the "entitlement state" - I have to agree that only the American people can "kill" it (killing a lot of individuals on the way to this goal, incidentally).

We, as the "American people," are being asked to cast aside the idea that we should be concerned about anyone but ourselves. That's really the message of these spokespeople for the 1%. They don't want anyone suggesting that we have any collective or community responsibility for those who can't provide basic necessities for themselves. A "state of mind" or "state of affairs" that suggests that we are "all in this together," and that we have a common responsibility for each other, means that the assets of the rich are on the line, to help fund the food, shelter, and health care needs of those who can't afford those things for themselves.

Unless the "American people" really want to make individual selfishness (or you can call it "responsibility") the watchword of our society, we are going to be asking those members of the 1% club to step up to the plate, and to contribute.

Contrary to what Forbes and The Wall Street Journal suggest, that seems like the right approach.
After all, they've got the Do-Re-Mi!