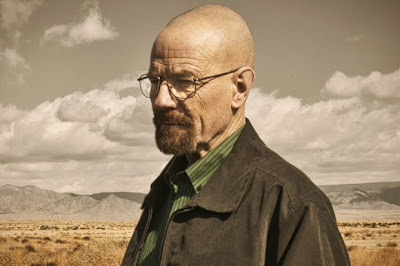 The final episode of Breaking Bad was aired last Sunday. I didn't watch it. I am a little behind the curve, but I am trying to play catch up. I am now well into the fourth season, doing that "binge watching" thing on Netflix. Though I was tempted to watch the final show last Sunday, I didn't want to get to the end of Breaking Bad without having gone through the entire story first.

For those who don't know the series, I do recommend it, even though starting to watch it from zero, as I have been doing, means that there is a lot of watching involved. I am someone who claims "I never watch television" (largely true), but I have found lots of interesting things to think about as I have been contemplating the downward trajectory followed by all the major characters in Breaking Bad, including Walter White, the central character, pictured above.

David Sirota, a political commentator who writes for Salon.com, put up a posting on Saturday, September 28th, the day before the Breaking Bad finale. Sirota's piece was titled "Walter White's sickness mirrors America." When I saw that title I thought I knew what Sirota's article would say, but that turned out not to be true. Sirota uses the sickness exhibited by Walter White as a metaphor for what is wrong with the health care system in the United States. I don't disagree with his observations, but I didn't find the article to be what I thought it would be, given the title.

My thought is that White's sickness (it's cancer, plus) does in fact "mirror America," but in a much more general way than Sirota says.

As Sirota notes, Walter White starts out as a well-intentioned person, trying to provide for and protect his family, and goes from there deeply into criminality and violence. By season four, I have found that my initial sympathy for White has much diminished.

If America were to look in the mirror, I think the country might well reach the same judgment about its own national conduct.

Initial good intentions don't excuse, and I can't believe, from my perspective in season four, that the ending is going to be any species of redemption. When you find that you are "breaking bad," you had better start that other kind of "braking." And the sooner the better. Sometimes you get so far gone you can't get back. It's too late then.