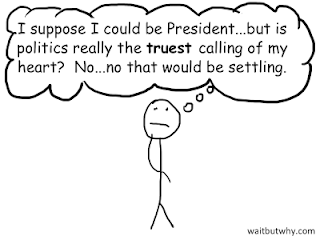 I am not sure who writes the Wait But Why blog, which announces that it posts every Monday and Thursday, but whoever is responsible is probably pretty pleased with the public response. The blog is definitely generating a following. Wait But Why is featured on the Huffington Post website, and has over 28,000 "Likes" on Facebook. The blog incorporates stick figures (as above) to address the particular topic of the day, and seems to be pretty entertaining. It also has what I would say is a bit of an attitude.

I knew nothing about Wait But Why until a week or two ago, when I came upon an article on AlterNet that took exception to a Wait But Why posting. That posting was titled "Why Generation Y Yuppies Are Unhappy."

Wait But Why opined that "Lucy," the person chosen to represent the Generation Y Yuppies, was not happy because "happiness" is equal to "reality" minus "expectations" (H = R-E). When you do the math on that equation, it's easy to see why the numbers aren't working out for Lucy:

It's pretty straightforward—when the reality of someone's life is better than they had expected, they're happy. When reality turns out to be worse than the expectations, they're unhappy.

Social media creates a world for Lucy where A) what everyone else is doing is very out in the open, B) most people present an inflated version of their own existence, and C) the people who chime in the most about their careers are usually those whose careers (or relationships) are going the best, while struggling people tend not to broadcast their situation. This leaves Lucy feeling, incorrectly, like everyone else is doing really well, only adding to her misery.

So that's why Lucy is unhappy, or at the least, feeling a bit frustrated and inadequate. In fact, she's probably started off her career perfectly well, but to her, it feels very disappointing.


Alyssa Figueroa, an Associate Editor at AlterNet, was definitely not pleased with the Wait But Why discussion. According to Figueroa, the message communicated by Wait But Why was to shut up, stop whining, and just accept life as it is. In her response, accompanied by a stick figure labeled "Lucy Pissed," Figueroa said that this is the right reaction:

Anytime you imply to millennials, or anyone for that matter, that they should “stop complaining, you don’t have it that bad,” you ultimately work to prop up a system of inequality — which is often the root cause of unhappiness. After all, there’s not too much to be happy about when you're living in a society where your life — food, shelter, healthcare, etc. — relies on a financial system that is structured in a way that squeezes profits out of a majority of people, who are left unfulfilled, to fulfill a few people's lives and make them very wealthy.

Yet, our desire to be happy amidst our dark reality is most likely what made this piece so popular. I saw too many friends posting this piece under statuses that read: “Guess that’s why we’re not happy haha” or “We really should stop complaining so much.” These are friends whose realities are quite harsh — making around $25,000 a year while trying to afford rent and food while paying back their more than $20,000 student loans. But instead of making millennials feel united through anger, which often is a catalyst for change, the piece manipulates millennials into feeling united over their "unwarranted" unhappiness, which leaves them with nothing more than a smirk and a shrug — the ultimate act of millennial complicity.

Perhaps the real way to deal with our unhappiness is to get motivated to fight to change our reality, which fortunately thousands of millennials are already doing. Certainly, fighting for change doesn’t mean your struggles will be replaced by happiness. But joining with others to express your collective unhappiness does work wonders for the mind, body and soul ...

I think that Figueroa is on to something. And I also think that Joe Hill is credited with a shorter format way of putting it: "Don't mourn. Organize!" 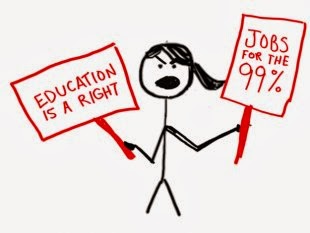