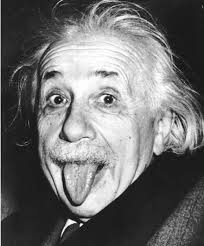 One of my physicist friends (I have more than one), passed along a recent video on string theory. It is pretty impressive, and entertaining, and features a sock puppet Einstein (with tongue).

I can't say I understood string theory after watching the video, but it made me wish I could. The video is worth watching (and as the star of the show says, at the end, "sorry it's so long"). Trust me, you probably won't get bored watching it.

The timing may have been purely fortuitous, or maybe there is something to that idea that there is a kind of "simultaneity" built into the Universe, but this video came to me just as I had just started reading a book called Farewell To Reality, by Jim Baggott. I have not yet gotten far into Baggott's book, but I think he is unlikely to be a big fan of string theory. He has subtitled Farewell to Reality as follows: "How fairytale physics betrays the search for scientific truth."

Having watched the video posted by, and starring, McGill University Masters candidate Timothy Blaise, I think I am going to be even more interested than I already was to read what Baggot has to say.

In the meantime, I am struck that all of us (even including the hip physicists who seem to know what they are talking about) are pretty much in the position of that Thin Man that Bob Dylan depicts in one of my favorite songs:

Because something is happening here
But you don't know what it is
Do you, Mister Jones?


I don't. And I am not convinced that anyone else does, either!