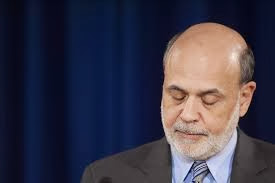 For the last year or so, I have been reading The Wall Street Journal as a kind of daily discipline. I don't much care about the details of "high finance," or about who is who at the CEO level of America's corporate leadership, and I almost never agree with The Journal's take on politics, society, the economy, or the environment. I am, in other words, purposefully exposing myself to a point of view with which I almost always disagree, and am doing so as a way to make sure I don't become intellectually insulated. Just like jumping into a cold lake in the winter time; it's supposed to be good for me!

The Journal's editorial on September 19th, titled "Mr. Bernanke Blinks," illustrates something I have noticed in The Journal (and among the "punditry" in general). The conduct of public officials is more and more being judged not by the actual impact of that conduct in the real world, but as against what the "pundits" have expected or said. In The Journal, this particularly happens when the paper comments (almost always unfavorably) on President Obama. This time around the comment was about a decision made by the Federal Reserve Board to continue a bond-buying program that has been associated with an "easy money" bias. Previously, the Chairman (Mr. Bernanke) had indicated that the Federal Reserve might start to "taper down" its easy money policy. The decision of the Federal Reserve Board on September 18th was to the contrary. The Federal Reserve decided not to do that (at least not right at this moment).

According to The Journal, Mr. Bernanke "blinked." Do you remember the President's decision not to pursue an individually-authorized military attack on Syria, despite his earlier "red line" comment? He, too, "blinked," because he didn't do what an earlier comment suggested that he would do, and the pundits excoriated him for that.

This is the phenomenon that struck me when I read The Journal's editorial about Mr. Bernanke. There seems to be a growing tendency to castigate or criticize a public official (our President, especially) when he or she doesn't do what the pundits and policy writers have predicted, or thought that he or she would do (sometimes based on statements made by the public official). In other words, rather than looking to see whether or not what actually happens might be good or bad, the good or bad judgment is based on whether or not the public official adhered to the opinions and expectations of the pundits.

This way of evaluating real conduct in the real world indicates a fundamental detachment from reality. What a public official "said" might or should happen is the test against which actual actions are measured. That is kind of going about it backwards.

A "realistic" approach to making judgments about the actions of public officials would be to measure actual conduct against the actual impacts of that conduct. Judged by that standard, of course, President Obama's "weakness" in not actually launching a military strike against Syria is leading to what may well be a very significant diplomatic victory.

And as for the reaction of the financial world to Mr. Bernanke's "blink." Well, the stock market went up! Maybe that was the right decision, after all.