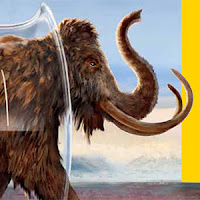 National Geographic and Earth Island Journal have both run articles on the concept of "de-extinction," or "revival biology." This is the idea that we should use modern techniques of genetic engineering to bring extinct species back to life. Click the links to read the articles.

The main idea of revival biology and de-extinction is that we should "revive" not only a few exemplars but the extinct species as a whole. Ironically, in the ever warmer world we have been creating through human actions, putting glaciers in retreat around the globe, the Wooly Mammoth is a prime candidate for revival.

Hank Greely, who is described by National Geographic as a "leading bioethicist" at Stanford University, is quoted in the magazine: “What intrigues me is just that it’s really cool,” Greely says. “A saber-toothed cat? It would be neat to see one of those.” Apparently, Greely believes that "the very fact that science has advanced to the point that such a spectacular feat is possible is a compelling reason to embrace de-extinction."

Stewart Brand, of Whole Earth Catalogue fame, is out beating the drums for revival biology. In essence, the "pitch" is that since human beings screwed things up, and killed off species, we should now make amends by using our newest technology to bring those extinct species back to life.

I am not sold on this project, personally. The fact that a so-called "leading bioethicist" is basing his support for de-extinction on his personal impression that de-extinction would be "really cool," doesn't calm my uncertainties.

Many extinctions can be directly traced to our human assertion that we should be in control not only of the human environments that we have indubitably created ourselves, but also of the entirety of the Natural World, which we most certainly did not create. I question the hubris of that assertion. I also suspect that it is the same hubris, and the same human impulse to assert human dominion over Nature, that is motivating the clamor for de-extinction.

Don't worry. We're in charge. We'll take care of it.