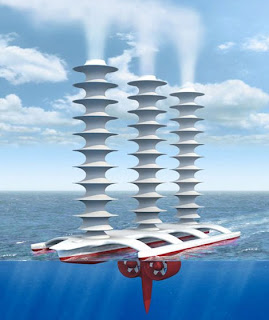 Back in May, I reported on the concept of "geoengineering," which is the idea that human beings should be attempting to make major changes to planetary systems, and to take upon themselves the obligation to "run" the planet, as a way that our human civilization might escape the consequences of global warming. Now, there is a book that discusses geoengineering in detail, Earthmasters, and it turns out that the author of the book, Clive Hamilton, is not much of a fan.

Hamilton is an Australian, and is a professor at the Centre for Applied Philosophy and Public Ethics, which is affiliated with both Charles Sturt University and the University of Melbourne. In an interview about his new book, Hamilton identifies one of our San Francisco Bay Area institutions as a key player in efforts to promote geoengineering. There is, in other words, a local angle:


There were a couple of big surprises. One was the extent of the geoengineering lobby and the links between the scientists and the investors. I developed a much stronger sense of the likelihood of a powerful geoengineering constituency emerging, which would — if it were not countered by a skeptical community of thinkers and campaigners — essentially take control of whole agenda. Plotting those links and laying them out was something that I go into quite a lot of detail over. At the same time it stimulated me to think about the military-industrial complex, the famous lobby group that help such sway in the U.S. in the middle of the 20th century.

One thing I noticed while doing this research and looking at scientists involved was the density of the linkages with the Lawrence Livermore National Laboratory. So I investigated further and thought it’s really quite astonishing the extent to which many, if not most, prominent scientific researchers in geoengineering in the U.S. worked at Livermore or have close links with people there now or those who used to work there.

Then when I read Hugh Gusterson’s book on Livermore (Nuclear Rites: A Weapons Laboratory at the End of the Cold War) and its role in the cold war and nuclear weapons development, I started to think much more carefully about the type of mindset that is especially drawn to geoengineering as a technological response to global warming. I think it’s quite alarming in its implications. That lead me to further think about the geostrategic implications of climate engineering, which is something that’s received almost no attention, but we do know that people in the military and related strategic communities are starting to think about geoengineering and what it would mean for international relations and conflict.

The Lawrence Livermore National Laboratory, a federally-funded research center that was founded by the University of California, and that is still affiliated with the University, is apparently at the center of corporate and governmental efforts to move to a geoengineering solution to our ever more apparent global warming crisis. This makes a certain degree of sense. I guess, as Hamilton is pointing to the use of geoengineering techniques as a kind of substitute for the weaponry that the Lawrence Livermore Laboratory works on most centrally.

And we all have something to work on, individually, by way of consciousness raising, as we contemplate the implications of the geoengineering concept,which Hamilton outlines as follows:

When human beings become so powerful that they transform the fundamental cycles and processes that govern the evolution of the earth itself ... we’ve reached an event that’s as significant as the industrial revolution, or even the process of civilization itself.

We can no longer think of the Earth as the passive and unresponsive backdrop to the human drama where we play out our parts in a kind of Shakespearean play and not worry about the backdrop. We now find that the backdrop, the stage scenery, has entered into the play and is disrupting the whole proceedings.

If there is no more human history distinct from earth history ... what does that mean?