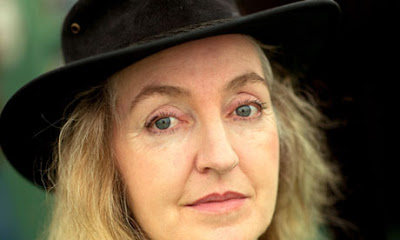 Rebecca Solnit grew up in Novato. That's in Marin County, north of the Golden Gate Bridge. She writes for The Nation, and for TomDispatch. That puts her to the left hand side of the political spectrum. I enjoy her political writing.

Solnit has written many books. The Faraway Nearby, her newest one, refers to the political issues of our time, but it is not really "political." Penguin Books calls it a "personal, lyrical narrative about storytelling and empathy."

Mostly, the Faraway Nearby is centered on Solnit's history and relationship with her mother, and it tells that story. The book tells it one way in the text, in twelve chapters with six mirrored, "matched" names, tied in the middle with a chapter called "Knot." And then there is another telling, entirely, in a kind of hallucinatory ribbon of a story that runs one line deep in a continuous strip of words, at the bottom of each page, from Page 3 to Page 254.

Many of the great humanitarian and environmental campaigns of our time have been to make the unknown real, the invisible visible, to bring the faraway near, so that the suffering of sweatshop workers, torture victims, beaten children, even the destruction of other species and remote places, impinges on the imagination and perhaps prompts you to act ... to see ... the self who is implicated.

That empathetic action of bringing the faraway near, to inform our action, is essential for politics. You can see Solnit do it in her political writings. In the end, though, says Solnit in this book, "the self is also a creation, the principal work of your life, the crafting of which makes everyone an artist."

But self and world must come together. The personal is political - because, in the end, we do not live alone.

Here is another good book. I recommend it.