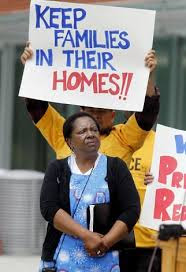 The City of Richmond has seriously discussed using its powers of eminent domain to take ownership of overvalued mortgages on homes, and then after taking title to those homes, to resell the homes to local residents at reduced prices that reflect their real market value. The proposed program (not yet realized) would be a way to preserve affordable housing options in Richmond, and to revitalize neighborhoods decimated by the failure of the housing market.

About a month after its editorial statement against the program that Richmond has proposed, the Journal ran a positive story outlining what other cities are doing. Other cities, too, are trying acquire underwater mortgages, and to create "Land Banks" that first acquire and then sell abandoned properties at reduced prices, as part of an effort to revitalize the cities' failing neighborhoods. Other cities are also taking action to preserve affordable housing opportunities for working families. However, no mention is made of eminent domain, and no denunciatory editorial accompanied the Journal's most recent news story. Apparently, the Journal doesn't object to the idea of municipal efforts to revitalize failing neighborhoods and to get housing back into the hands of working families at prices they can afford, so long as the city's eminent domain powers are not invoked.

Let's reflect a moment about the Journal's position. The Journal appears to concede that when cities act, they act on behalf of entire communities, and that it is legitimate for government to act on behalf of the collective whole. This is, in fact, a realistic view of exactly how our governments ought to conduct themselves. Individual problems are not only individual problems; they can be "community" problems, too. When community problems must be addressed, governmental action on behalf of the community is absolutely required.

If that is correct, and it is appropriate for our cities to acquire "private property" to achieve a community goal, why should our governmental institutions not properly be able to use all of their governmental powers, including the power of eminent domain, which allows governmental agencies to take property for "public use," so long as a fair price is paid?

There is no good reason to prevent a government from using all available governmental tools, when the government seeks to carry out a program to benefit the public. The Constitution says, and the courts have confirmed, that governments are entitled to "take" private property for public use, so long as a fair price is paid. That's the definition of "just compensation."

Could it be that the banks (with the Journal, acting as their apologist) doesn't want the public to be able to acquire the banks' overvalued mortgages for a price that is actually "fair," and that what the banks want is something that is "more than fair" to them?

That's my bet! And I'm with Richmond!