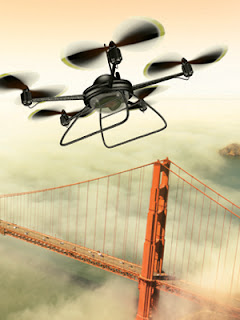 Lawyers and legislators are beginning to think about drones. State Senator Alex Padilla has introduced a bill that would equate observing someone by means of a drone to looking at them through a hole in a bathroom wall. Check out Senate Bill 15 to see what Senator Padilla is proposing. The bill passed the Senate but is currently stalled in the Assembly Public Safety Committee,  and it won't be going anywhere now. The bill will presumably come back for another vote in the Assembly early next year, when the Legislature reconvenes.

Meanwhile, in its August, 2013 edition, California Lawyer magazine ran a major story on the legalities. This magazine is mailed out to members of the California State Bar, but since the article is online, everyone can read it. It is fair to say that no one seems to believe that we have things under control, where drones are involved.

Looks like we have a new problem to worry about!