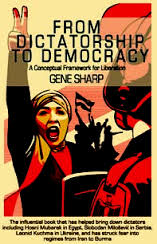 Anyone who wants seriously to think about using nonviolent techniques to effect political change should be familiar with the works of Gene Sharp. I particularly recommend From Dictatorship To Democracy: A Conceptual Framework For Liberation. You can buy the book (in the form illustrated) by clicking this link. Or, you can download a less pretty but free copy by using this link.

Sharp is not a "loosey goosey" kind of guy. He makes a convincing case that it is possible to "disintegrate" (his word) the power of dictatorship, and provides a list of 198 methods of nonviolent action.

The best part of this book, from my point of view, is that I think its techniques can be adopted to places where oppressive governments prevail in what they claim is a "democracy." When "we" are the 99% and those in actual charge of the government are the 1%, it is probably time for us to start using these techniques to "occupy" our own government. That idea would be "bringing it all back home."