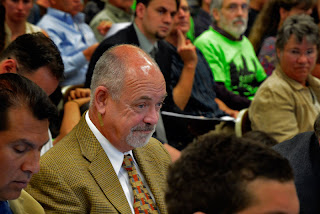 Bill Kocher (pictured at a LAFCO meeting in June 2012), has been the Santa Cruz City Water Director for twenty-seven years. During a good bit of that time, Mr. Kocher has been a strong advocate for desalination. He is, in fact, one of the officers of CalDesal, an industry lobbying group that says that its organizational purpose is to focus "solely" on desalination as a water supply option for the state.

Mr. Kocher's advocacy for desalination has been convincing to the elected members of the Santa Cruz City Council. The City Council has repeatedly, and consistently (and unanimously) voted to fund the city's proposed desalination project, and the city has, so far, invested something like $17 million dollars in the effort. Currently, the city is preparing an Environmental Impact Report, or EIR, on the proposed project. The comment period on the Draft EIR ends today.

While proceeding full steam ahead, the city's proposed desalination project is facing criticism. One would not expect, at this juncture, that the project's number one advocate would abandon ship. Yet, this is exactly what seems to be happening. On Thursday, August 8th, Mr. Kocher announced that he was going to retire virtually immediately (as of September 13, 2013).

Asked by a local reporter whether desalination -- and the growing political opposition to it -- played a role in his decision to leave, Mr. Kocher said "no."

"I don't have any quit in me," he told the Sentinel. "There is no chance I would walk away from something."

If Mr. Kocher is telling the truth, and there is "no chance" that he would "walk away from something," then a normal retirement is not what is actually happening here.

Because the guy with "no quit in me" just quit.