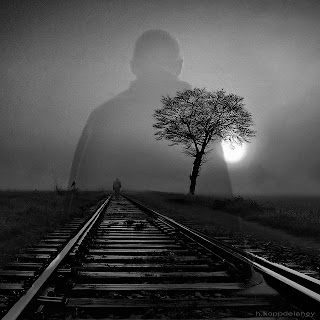 Some writers who stayed in Nazi Germany and continued to write during the Nazi period, in ways that did not appear, at least, to be critical of the Nazi regime, later claimed to have been "inner emigrants." Some of them claimed, in fact, to have "suffered," just as the Jews did.

Writers like Thomas Mann, who left Germany, and thus "emigrated" in real terms, denounced this concept. I suspect that Plato would not have approved the concept of "inner emigration," either. You can read about the "inner emigration" controversy in post-World War II Germany by clicking this link.

I am most concerned with the contemporary relevance of the "inner emigration" concept. When we stick around and don't say or do anything, in the face of evil, let's not try to fool ourselves about our lack of courage, as the "inner emigrants" of the Nazi era arguably did.

When we see and experience evil at work in our contemporary world (and I count the destruction of the natural environment as among such evils), there is no "inner escape." We need to speak truth to power. We need to become involved, ourselves, in the distasteful world of politics (just as Plato opined). Outward and visible opposition and resistance to the evil we see is what is required of us now, and always.

The destruction of our natural environment, of course, is only one example of the truths about our contemporary world, our "political world," that we sometimes seem loath to confront.