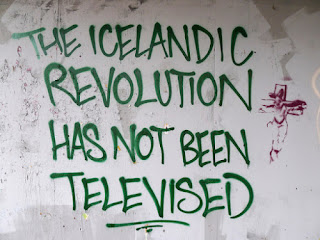 Joel Bleifuss wrote a great editorial called "Icelandic Lesson in Democracy," which appeared in the May 2013 edition of In These Times. I can't find any online version, and so I can't provide a link. This may be a message to interested persons that they should have their own subscription to In These Times!

There is another way to find out about the "Kitchenware Revolution" in Iceland. The News of Iceland blog has a nice explanation. As noted therein, "it seems that this revolution did not capture the attention of the foreign media at the time."

When the big banks failed in Iceland (as they failed in the United States), the private losses of the banks were not "socialized," to use Bleifuss' word. Instead, the government compensated all citizens who lost money in the failed banks. The big creditors to whom the banks owed money were not bailed out.

This did not occur without massive protests on the street. Read about it in the News of Iceland account.

And next time this happens here...

Get out your pots.