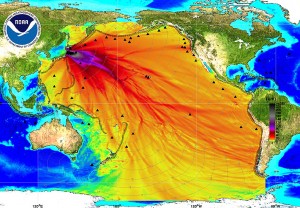 This colorful image shows "leaks" from the failed Fukushima Daiichi Nuclear Power Plant, as they migrate into the environment. At least, "leaks" is how the operator of the plant is describing the situation. The Fukushima Update blog has a somewhat different view, and puts it this way:

Fukushima [has] ... pumped out huge amounts of radioactive iodine 129 – which has a half-life of 15.7 million years. Fukushima has also dumped up to 900 trillion becquerels of radioactive strontium-90 – which is a powerful internal emitter which mimics calcium and collects in our bones – into the ocean. And the amount of radioactive fuel at Fukushima dwarfs Chernobyl … and so could keep leaking for decades, centuries or millennia.


TEPCO graphics of the Fukushima plants even appear to show water directly flowing from the plant to the ocean.


The bottom line is that the reactors have lost containment. There are not “some leaks” at Fukushima. “Leaks” imply that the reactor cores are safely in their containment buildings, and there is a small hole or two which need to be plugged. But scientists don’t even know where the cores of the reactors are. That’s not leaking. That’s even worse than a total meltdown.

This article can be seen as providing an excellent illustration of how it is possible to use language to mislead, not  to inform.

This article might also be seen as providing an illustration of how our hubris can have horrible consequences. We have been repeatedly assured that choosing to boil water for steam power generation, using nuclear reactions, is "safe," or can be made safe, but all our "fail safe" mechanisms, in the end, didn't end up working in this case.

For me, this article is delivering the news (once more) that the laws that govern the World of Nature are different from human laws. Our human laws are susceptible to change, but not the laws that govern the natural world. The massive release of deadly radioactive materials documented in the quoted article will proceed for "decades, centuries, or millennia." There is probably nothing we can do about that, now.

Our inability to make Nature change course, and to modify the laws that drive its realities, is all the more reason not to push our luck with Nature, and to think that we can somehow escape the impacts of the laws of Nature when they go to work.

The "Precautionary Principle" remains a piece of good advice. So, let's pay attention!