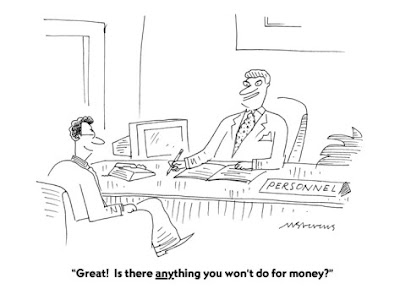 I have to say that I like this cartoon. It captures exactly the way that I, personally, tend to make decisions - and the way I think decisions should actually be made.

Sometimes, the most important step in deciding what to do is the step of deciding what you "won't do." I recommend that approach. People should explore their "won't do it" parameters before deciding what they "will do." My partiality for the "won't do it" method of making decisions goes back to my draft resistance days, in the late 1960's. I decided that killing people was something that I just "wouldn't do." That certainly helped narrow down the range of choices facing me, vis a vis the draft.

Deciding what you "won't do," before deciding what you are actually going to do, is also a good way to make public policy choices. For instance, the voters of Santa Cruz County decided, when they passed Measure J in 1978, that one thing they "wouldn't do" was to allow the conversion of commercially productive farmland to some other use. That "won't do it" decision has definitely shaped the kind of place in which we live - and I think in a good way. We have greenbelts and a strong agricultural industry because we made public policy decisions about what we "wouldn't do" at the outset.

This evening, Tuesday May 7, 2013, the Santa Cruz City Council and the Soquel Creek Water District Board of Directors are meeting at 7:00 p.m. at the Santa Cruz City Hall. They will be holding a kind of study session on a proposed desalination project in my home town. The "won't do it" approach should be considered as a possible way to structure the decision making process, at least in my opinion.

Ultimately, the voters of the City of Santa Cruz are going to decide whether or not to begin "manufacturing water" to deal with the long term water supply problems confronting Santa Cruz County. I think that's a fair description of the desalination option. An environmental impact review process, which will inform the decision, is just about to begin. Hopefully, the Draft Environmental Impact Report (EIR) will fully explore genuine "alternatives" to the proposed desalination project. That's what the law requires, anyway: the consideration of genuine alternatives to the proposed project, not just alternative ways of carrying out the proposed project.

So far, the Santa Cruz City Council, reflecting the bias of its Water Director, has not really been willing to consider the alternatives. They think they "know" that desal is the only way to go. This is fairly understandable, since the City's Water Director plays a leadership role in a statewide, industry-funded group called CalDesal that describes its purpose this way:

CalDesal is the only advocacy group in California solely dedicated to advancing the use of desalination. Other organizations choose not to engage, or address desalination as part of broader policy platforms. CalDesal’s narrow focus allows for the most targeted, credible and persistent support for this important technology.

In order to make sure that genuine alternatives are in fact given full review, we should begin with a "won't do it" approach to our decision making process. Let's just suppose (and this would be a hypothetical or "heuristic" supposition at this point) that we make a community decision that we simply won't deal with our water supply problems by "manufacturing water." If we were to make that hypothetical, "I won't manufacture water" decision, as our starting point for the analysis of alternatives, then all that would be left would be a range of genuine alternatives to desalination. The community could focus on whether those genuine alternatives would be acceptable, and could fully evaluate their cost and environmental impact.

The "we won't do desal" proposition, of course (again, as a hypothesis) would really be just another way of saying that we might decide, as a community, to live within the limits of the natural world.

Anyone who regularly reads this Two Worlds blog will immediately know that I think that living within the limits of our natural environment is definitely a "hypothesis" we should explore - at the very least. I am close to thinking it is one of the Commandments!

So, if the City and the Water District don't take the "I don't do desal" approach, at least as a hypothetical way fully to understand our genuine alternatives, and if they just study alternative ways of doing desal, then I, for one, am not going to be persuaded that we should make a commitment to desalination.