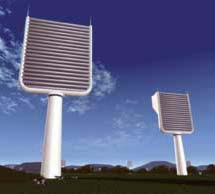 In November 2012, the World Bank released a report it titled, Turn Down The Heat: Why A Four Degree Warmer World Must Be Avoided.

Truthout, which advertises itself as a source of "fearless, independent news and opinion," has now informed its readers, in an article published on January 11, 2013, that things are indeed as bad as the World Bank says, and probably worse. However, Truthout couples its dire warning with a contradictory message:

Impacts are already worse than stated, but fortunately, solutions could be easier than are commonly understood.

What solutions might they be talking about? Check the image above. It's called "air capture," and this means sucking carbon dioxide directly out of the air, and then sequestering it. This is the new technology that Truthout thinks can save us. Technology (once again) rides to the rescue:

Billionaires across the globe are investing in carbon capture and sequestration technologies to meet the climate change challenge. Outfits like SRI in California are looking to capitalize on the vast amount of money soon to be spent on cleaning up climate pollution by sucking CO2 straight out of the air. The future could be brighter than we think.

To be fair to Truthout, the article to which I am citing also talks about ways we can use energy more efficiently, and "conserve" our way towards a solution to the climate crisis. But you can sense the hope being placed in billionaires and new technology. That's the real "excitement" in the Truthout presentation.

My reaction is not positive. In my opinion, whenever human beings (even the "good guy" intellectuals like those at Truthout, those who consider themselves apostles of "fearless, independent news and opinion") start believing that human beings can assume responsibility for World of Nature, and operate its processes the way we operate the machines that we have brought into being ourselves, they are engaging in wishful thinking.

Pardon my skepticism about the idea that "billionaires" will save the world. And pardon my skepticism about "solutions" to our climate crisis that are premised on the idea that we can run the Natural World as though it were like one of our human-created industrial processes. Our creative abilities are boundless, as long as these energies focus on the world that we create, and for which we bear complete responsibility. But when we start assuming that we can run the World of Nature, too, a world that we did not create, we get outside the "bounds" of what we can actually accomplish.

That's the truth, as I see it.