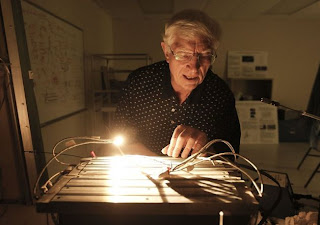 The image above is from the January 8, 2013 online edition of the San Francisco Chronicle. It depicts Armand Neukermans at work in his Sunnyvale laboratory, where he is doing research to find out how to make clouds reflect more heat and light. Neukermans is thinking that he can "engineer" a solution to global warming, by reworking some of the the planet's most basic operating principles.

I liked the letters to the editor submitted after the initial publication of the article about Neukermans' efforts. In particular, I applaud the comment of Jim McDannold, of Fort Bragg, who says that "we cannot, as IBM states, 'Build a smarter planet.'"

The premise of my "Two Worlds" thinking is that while human beings are absolutely able to construct a "human world," which is the result of human activity, we cannot (and should not try) to be in charge of the World of Nature, upon which we ultimately depend.

I doubt that either Jim McDannold or the other letter writers have been reading my Two Worlds blog. But they could have been writing it!

When will we learn the lesson so well articulated by McDannold?

Wouldn't it be better to use all that expertise, money and intelligence to find ways to minimize our footprint rather than trying to alter a system of which we have little knowledge?

I also find it egregious that clinical trials would be dependent upon consultations with the "stakeholders." Who are these stakeholders? It seems to me that each and every living creature on this planet are the real stakeholders here and should have more of a say than a bunch of investors.

I believe that the planet is a lot smarter than we are and that, when it gets right down to it, if we do not throw or resources into shrinking our foot print, the planet will simply kick our asses out into space and recover just fine without us.