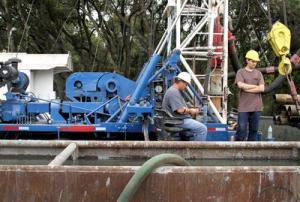 The Santa Cruz Sentinel, my hometown newspaper, began running a series on desalination yesterday. Click here for the first article in the series.

The debate about desal is terrifically important, but the key political question, right now, is not actually whether desal is (or is not) a good option for the City of Santa Cruz. The question right now is whether City voters are going to assert their right to make that decision on desal themselves, or whether they will trust their elected representatives to make it for them.

Measure P, on the ballot in the City of Santa Cruz this November, would guarantee the voters' right to make the final decision on the proposed desalination plant. Since building a desalination plant would have huge cost and environmental impacts, I think that's good insurance. I am definitely voting "Yes" on Measure P.

Last Thursday night, I attended a Santa Cruz City Council candidates' forum. Measure P was a main topic of discussion, and desalination and other important water policy issues were debated. One Council candidate, Richelle Noroyan, stormed out of the forum, about two-thirds of the way through, saying "this isn't working for me." Noroyan decamped the meeting when the moderator tried to point out that she had just made fundamental misstatements about the law, with respect to an application pending before the Local Agency Formation Commission, or LAFCO.

The moderator was right about the law, and Noroyan wrong, but whether it was appropriate for the moderator to point out Noroyan's error, in the context of the forum, is a fair question. Arguably it wasn't, but if elected officials stormed out of every meeting at which someone made an inappropriate remark, not much public business would get done. One reason for the voters to vote "Yes" on Measure P, and to assert their right to vote on the proposed desalination plant, does relate to how elected officials conduct themselves when serious questions of public policy are at stake. A scorecard, distributed at the forum, indicated that candidates Pamela Comstock, Cynthia Mathews, and Richelle Noroyan all said "No," when asked whether they would "get specific information before approving a desalination project." At least for me, that's concerning. I do think this is an appropriate case for the voters to have the last word. The complete scorecard is online right here.

I have mentioned desalination before, in this "Two Worlds" blog, because I think that desalination is a perfect example of how human beings are trying to ignore the limits of the Natural World, upon which we ultimately depend. With desalination, we are attempting to "manufacture" a basic natural resource, as though we were the "creators" of the Natural World, rather than "creatures" who must live within its limits. The Friday Sentinel quoted Brent Haddad, who directs the Center for Integrated Water Research at UC Santa Cruz, as follows:

Desal is technology that is more profound than we think because, in the broadest sense, we are reversing the water cycle that has flowed in one direction since the beginning of Earth.