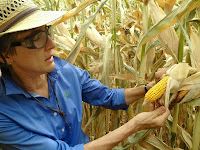 Most scientists agree that global warming is real, and that human activities are causing it. It seems likely that the drought currently being experienced in the corn-producing regions of the United States is related to such human-caused climate change. Not to worry! The Monsanto Corporation has a solution.

Monsanto is developing a drought resistant species of corn, clearly seeing global warming as a business opportunity. As the Los Angeles Times says, "The worst U.S. drought in half a century is withering the nation's corn crop, but it's a fertile opportunity for makers of genetically modified crops."

Our ever-developing technology gives us great abilities to change the reality of the world in which we live. But if we don’t pay attention to the “two world hypothesis,” and understand the nature of the two realities we inhabit, we can be fooled into thinking that we can not only make and remake the “human” world, but the world of Nature, too.

You know, I think that is a big mistake!