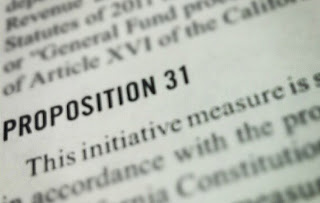 Proposition 31 is an example of bad government. California voters will get to vote on this measure soon. It's on our November ballot.

Bad as it is, this initiative measure is touted as "good government." It's a "reform" measure, or so proponents claim. The leading proponent, by the way, is a Southern California billionaire, Nicholas Berggruen, but Santa Cruz County folks should know that there is a "local angle," too.

Proposition 31 was submitted to the Secretary of State by Bruce McPherson, formerly a statewide Republican Party leader who is now running for the Fifth District seat on the Santa Cruz County Board of Supervisors (the San Lorenzo Valley and Scotts Valley seat). After I highlighted Mr. McPherson's sponsorship of Proposition 31, Mr. McPherson promptly withdrew as a sponsor of the measure, and quit the Board of Directors of California Forward, the group that thought this measure up.

So, what is so bad about Proposition 31?

Proposition 31 proposes an amendment to the California Constitution. If enacted, Proposition 31 would fundamentally change our system of government, by allowing local government agencies to "nullify" state laws with which they disagree.

Proposition 31 is an example of "bad" government, because it pretends to do one thing, while actually doing something else. Environmental groups, like the Sierra Club, are doing everything they can to get the word out, but they don't have any billionaires on their side. Unless voters really pay attention to what Proposition 31 will do, its "reform" label may convince voters to cast a "Yes" vote.

The last statewide Constitutional initiative that is somewhat equivalent to Proposition 31 was Proposition 13 (just "flip" the numbers: 13 to 31).

Proposition 13, too, seemed imbued with a "reform" purpose, and was adopted as a "reform" measure in June 1978. In fact, Proposition 13 led to a wholesale change in state government, and we are still suffering with that one!

Let's hope that the voters can penetrate the packaging on this year's leading "bad government" measure. If they don't, the California environment is going to be facing even more (and very serious) trouble.