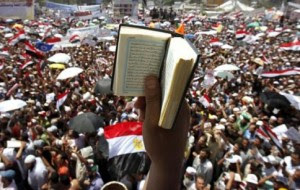 The First Amendment to the Constitution of the United States says this:

Wikipedia calls this "freedom of religion."

That's true, of course. The Constitution guarantees everyone the right to practice their own religion, freely, and I think that is good.

More important to me, however, is that the separation of religion and politics provided for in the First Amendment is a way to give us freedom from religion.

Nothing is more destructive of peace and prosperity than the idea that human societies should be built upon religious principles. Click on the picture to read a contemporary story of what happens when religion is allowed to become a political issue. Or, read the latest news reports from the Middle East. Or, take another look at a picture of the twin towers, on fire, and before they fell on 9/11.

Freedom from religion. I'm all for it!