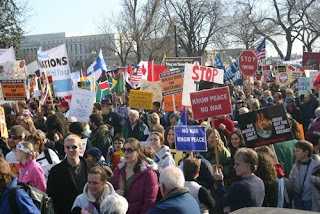 Emily Badger asks, "What Makes a Public Space Good for Democracy?" The question is posed in Badger's recent article in The Atlantic Cities, an article I found interesting. Badger is not so much raising her own question as reporting on a question posed by political scientist John Parkinson, author of a book entitled, Democracy and Public Space: The Physical Sites of Democratic Performance.

I like the use of the word "performance" in the title of Parkinson's book. It reminds us of that Shakespearean notion that our actions are, in fact, "performances," and that we are all "actors," whatever role we choose to play on the stage of life.

The answer to the question posed about public space, for both Parkinson and Badger, seems to be that you need a capital city with a LOT of space. The city that tops Parkinson's list, as the best capital for democratic "performance," is Berlin. If that's true, then I'd say, based on the movies showing Nazi demonstrations in Berlin, that Berlin is not only suitable for "democratic" performances, but for other kinds of political performances, too.

In a more metaphorical sense, the performance of politics (our political actions), whether democratic or otherwise, always need "space." There must be "room" for expression, and I personally think that it is "psychological" room, much more than "physical" room, that is the specific sine qua non of politics.

"Space," in this sense, means a "sense of possibility," more than anything else, a sense that there is "room" to act.

Clearly, the physical layout of cities can enhance or undermine the possibilities, and either encourage political activity (or do the opposite).

The most important thing, however, is not the physical conditions we confront outside ourselves, but what we "think," internally.

We need capacious thoughts about politics, even more than capacious plazas and parks.