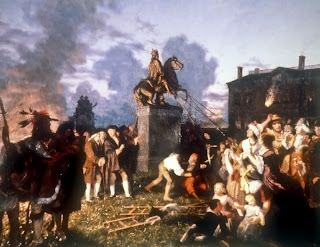 I recently made a new Facebook Friend, and immediately noted that her political designation was "Very Liberal." I pretty much identify with that description, so I clicked on the "Very Liberal" link I found on her "Info" tab. I was pleased to see that there is a whole Facebook page for those Facebook patrons who like to describe themselves in those "Very Liberal" terms.

The image here is the image that Facebook uses to provide some graphic representation of what Facebook thinks about that "Very Liberal" ideology. The painting is entitled Pulling Down The Statue of King George, and was painted in 1859 by Johannes Adam Simon Oertel. Based on my "No ... King" sentiments, I think they have the right picture for me.

The official Facebook description of the "Very Liberal" category is as follows:

Liberalism (from the Latin liberalis) is a political ideology or worldview founded on ideas of liberty and equality. Liberals espouse a wide array of views depending on their understanding of these principles, but generally liberals support ideas such as constitutionalism, liberal democracy, free and fair elections, human rights, capitalism, and the free exercise of religion.

Liberalism first became a powerful force in the Age of Enlightenment, rejecting several foundational assumptions that dominated most earlier theories of government, such as nobility, established religion, absolute monarchy, and the Divine Right of Kings. The early liberal thinker John Locke, who is often credited for the creation of liberalism as a distinct philosophical tradition, employed the concept of natural rights and the social contract to argue that the rule of law should replace absolutism in government, that rulers were subject to the consent of the governed, and that private individuals had a fundamental right to life, liberty, and property.

With the exception of "capitalism," about which I reserve judgment, I think they've got me!