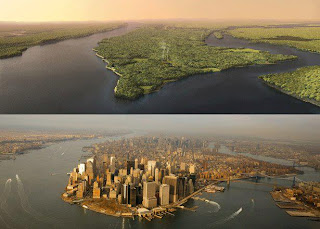 This double-framed picture depicts Manhattan Island in 2009 - and in 1609. Or such is the conceit. I found the image in a June 24, 2012 posting on the Facebook page maintained by a group that calls itself Universe Explorers. I think this image well illustrates the fact that we live, most immediately, in a world that we create ourselves, and that the world that we create is built "in," and "on," (and may even seem to displace entirely) the world of Nature that remains the necessary foundation for all we do.

For those who love New York City, as I do, there is an incredible power and majesty in what humans have created on Manhattan Island. We call the real estate that we create "development," and differentiate our "improvements" from the "land" itself. Check a property tax bill to see what I mean; those are our categories.

And maybe our creative efforts really have "developed" and "improved" the Manhattan Island of 1609. Or maybe not. Things are different on that island, certainly, because we have largely replaced a world of nature with a completely human world.

I maintain that it can be easy to forget our dependence on the natural world if we focus our celebratory attention too much on the world and the works that we create. It is easy to forget that we remain, ultimately, dependent on the world of nature.

The Two Worlds Picture I took in Machu Picchu shows that there is another way we might go about our city-building. That way of building, also made vivid in a photographic image, reminds us that we live within, and not apart from, Nature.

Such reminders, along the way, might have meant a different set of comparison images, with our New York City world of 2009 reflecting and retaining at least something of the world that came before us - the world upon which our lives depend.