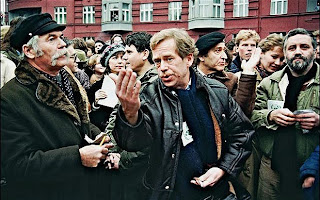 Václav Havel, who died in December of last year, was a playwright and a politician. For a time, he was the President of Czechoslovakia, and later of the Czech Republic, but Havel is best remembered for having led “the Velvet Revolution,” in 1989, which toppled the communist regime in Czechoslovakia.

I have written about Havel before; in fact, more than once. Last Friday, a week ago, this quotation from Havel appeared in my email inbox, thanks to Transition Santa Cruz:

I particularly agree with Havel that hope is “not prognostication.” Predictions and prognostications are always based on the idea that reality is something that “happens to us,” something that we might predict, with some luck; that we can track and document. In fact, “reality” emerges from the actions we take ourselves. If we are “hopeful,” rather than filled with doom and gloom, it is because we know that his attitude, this orientation of the spirit, is something that “makes sense.”

It makes sense, to me, to recognize our ability to change what we do, and thus to change the world.

That’s what Transition Santa Cruz advises, too. That’s why they sent supporters the Havel quote.