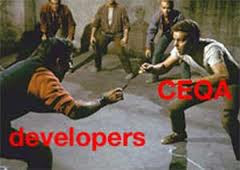 Last week, I made a presentation to a class at UCSC, speaking about "The CEQA Experience."

The "CEQA experience" can be something like what the image here portrays, though depicting CEQA as a combatant against developers would only tell a very small part of the CEQA story. (Incidentally, as with virtually all the posts I make to this blog, if you click on the image, you will be connected to its origin on the web).

I prefer to think of CEQA as a "good government" statute - one that makes our governmental agencies "stop and think" before they act. It is also a law that gives real power to ordinary people, vis a vis their government. That's what the "CEQA Three-Step" is all about.

Once a governmental agency has determined that a proposed project "might" have a significant adverse environmental impact, the agency is required to prepare an Environmental Impact Report, or EIR, and to consider that informational document before making a decision on the proposed project. CEQA also has a "substantive mandate." If it is feasible to eliminate or reduce the negative environmental impacts identified in an EIR, the governmental agency is required by CEQA to take action to do just that.

The "CEQA Three Step" is the process by which an Environmental Impact Report is prepared: (1) The agency prepares a "Draft" EIR, describing the project that it is proposing to carry out; (2) Any person is allowed to comment on the Draft EIR; (3) The governmental agency proposing the project must provide a substantive response to every substantive comment made. The "Final" EIR is the Draft EIR, plus the comments received, plus the responses to the comments. This "Final" EIR is what the agency must consider before approving the project, and this is the document that will establish whether or not there is a "substantive mandate" that requires the agency to make modifications to what was originally proposed.

The courts review agency compliance with this three-step CEQA process. And here's where the power of ordinary persons to affect governmental actions comes in. The courts have been VERY clear that the agencies cannot "blow off" substantive comments made by the public. Therefore, if a comment raises a serious question or concern the government MUST address that question or concern in a substantive and serious way. If the government doesn't do that, the courts have been very good about invalidating any EIR that has not provided an adequate and substantive response to a serious question or concern, or to new information that has been submitted through the public comment process. If the court finds that the agency has not dealt substantively with substantive questions, concerns, and suggestions that come to the agency through the CEQA process, the court will reverse any decision made on the basis of such an inadequate EIR, and force the governmental agency to go back and do an adequate job.

Thanks to this "CEQA Three-Step" process, ordinary people have a real ability to get governmental staff and consultants actually to work for them, and to deal seriously with their suggestions and concerns. If the governmental agency doesn't respond substantively to any substantive comment, it is putting its decision-making process in jeopardy of reversal.

Thanks to the "CEQA Three-Step," in other words, ordinary people have an opportunity to make the government "do it right." To achieve that result, however, we do have to get involved (seriously and substantively involved) ourselves!