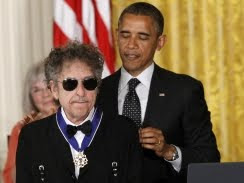 I was pretty pleased to see that President Obama has honored Bob Dylan with one of those Presidential Medals of Freedom. This is the highest civilian award given out in the United States, and it is not handed out that often. Here is a list of past recipients, if you would like to browse.

Apparently, the Presidential Medal of Freedom is considered to be more or less the American equivalent of a knighthood. That would place Bob Dylan on a par with Paul McCartney, who was knighted by Queen Elizabeth in 1997. Actually, if I had to choose (and luckily I don't), I think I'd give the Nod to Bob.

Meantime, while knighthood equivalents come and go, Bob Dylan is still out there singing, still on the road, and still "heading for another joint." Once in a while he sings one of my favorites, It's Alright Ma (I'm Only Bleeding). If he had sung that song in the White House, then the honors would have been going both ways, and it does contain some lines that every President needs to hear, no matter how good that President is doing:

While preachers preach of evil fates
Teachers teach that knowledge waits
Can lead to hundred-dollar plates
Goodness hides behind its gates
But even the President of the United States
Sometimes must have
To stand naked.