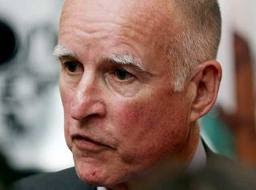 As announced in yesterday's newspaper, Governor Jerry Brown is going to ask the State Legislature to pass special state legislation to exempt the proposed high-speed rail project, the largest infrastructure project ever proposed in California history, from the kind of environmental review that every other significant project has to undergo. That is correct. You read it right.

Dan Richard is the Chairperson of the California High-Speed Rail Authority, the state agency in charge, and is the man that Governor Brown has made his personal "point person" on high-speed rail. Richard absolutely promised the State Senate, in official testimony, that he and the Governor would never ask for any such special treatment under CEQA (the California Environmental Quality Act). You can watch him make that promise to an official State Senate hearing on May 15th, by clicking this link:

We have never and we will never come to you and ask you to mess with the CEQA requirements for the project level.

Well, if you read the news article, you know that Dan Richard and the Governor lied.

I have been deeply engaged in working on high-speed rail issues on behalf of residents of the San Francisco Peninsula and farmers in the Central Valley. Both groups have tried their very hardest to have the state "do it right" where high-speed rail is concerned. During the three years I have been personally involved, the High-Speed Rail Authority has consistently "done it wrong." The Legislative Analyst's Office, the State Auditor, and the Authority's own Peer Review Group have repeatedly pointed out that the Authority has mismanaged the project, and has failed and refused to deal with significant financial, environmental, and community impact issues. I know, from my personal involvement, that the proposed project will absolutely have these bad environmental impacts (unless CEQA is applied to require alternative approaches and mitigations):


CEQA is a "stop and think" statute. It is outrageous that the Governor would seek a modification of this incredibly important environmental law to jam through a project with such massive negative impacts, without going through the process that might result in alternative approaches and mitigations that could result in a project that lives up to its "green" reputation - a reputation that is absolutely not deserved by the current project design.

If you want to help ensure that there is an adequate environmental review of a project that "might" produce some positive benefits (though there is no identified funding for the project beyond the construction of a $6 billion dollar non-high-speed set of tracks across farmlands between Merced and Fresno), you should contact your State Senator and Assembly Member, and tell them to reject the Governor's request for a CEQA exemption for high-speed rail. You can find out who your elected state representatives are, if you don't know, by clicking right here.

If you really have energy to fight this "railroad" of the environmental process, contact any and all environmental groups that you may be a member of, and urge them officially to oppose this kind of CEQA exemption. Sierra Club California is doing a great job standing up for CEQA. Most other environmental groups are remaining silent, and are standing by the tracks watching the train go by.

Unfortunately, the proposed high-speed train project is a "train to nowhere." Complying with CEQA just "might" turn that train around.