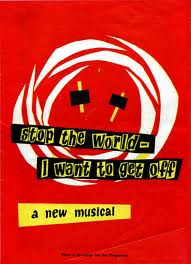 Stop The World - I Want To Get Off is a musical, set against the backdrop of a circus. The West End production opened in July 1961, the year I graduated from high school. It came to Broadway in 1962.

I don't think I ever saw Stop The World - I Want To Get Off, but I certainly know the feeling!

It is, in fact, exactly the same feeling that is documented by Hannah Arendt in her wonderful book, Between Past and Future, as she cites a parable from Kafka:

He has two antagonists: the first presses him from behind, from the origin. The second blocks the road ahead. He gives battle to both. To be sure the first supports him in his fight with the second, for he wants to push him forward, and in the same way the second supports him in his fight with the first, since he drives him back. But it is only theoretically so. For it is not only the two antagonists who are there, but he himself as well, and who really knows his intentions? His dream, though, is that some time in an unguarded moment - and this would require a night darker than any night has ever been yet - he will jump out of the fighting line and be promoted, on account of his experience in fighting, to the position of umpire over his antagonists in their fight with each other.

It really is too bad. We don't get to be the umpire:

The time is out of joint: O cursed spite,
That ever I was born to set it right!