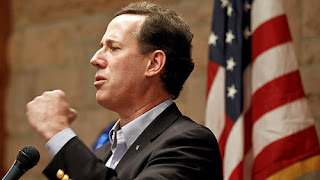 Pictured is Rick Santorum, Republican candidate for President. On February 19th, Santorum was reported to have said that President Barack Obama is "beholden to radical environmentalists, and has a world view that elevates the earth above man.”

I would bet that Mr. Santorum thinks that it's pretty "radical" for someone to suggest that "man" depends on the Earth (and not vice versa).

From my perspective, who could doubt it? Some kind of "radical" someone, I'd say!