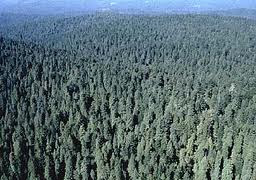 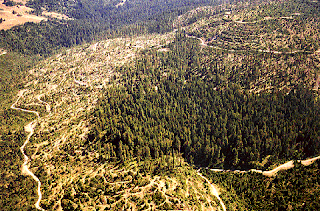 Senate Bill 730 (authored by State Senator Christine Kehoe, a Democrat) is one of the “settlement claims” bills passed on a pretty routine basis each year. In a recent Sacramento Bee op-ed, State Senators Anderson and LaMalfa (both Republicans) complain about this bill. They concede that these settlement bills are mostly just fine, providing appropriate compensation to individuals or businesses that have been wronged by the state. In recent years, though, they say, “the liberal Democratic majority has slipped very questionable settlement claims into these bills.”

Their specific objection seems to be a proposed $6 million payment to the Environmental Protection Information Center (or EPIC). That payment would reimburse EPIC for its attorneys’ fees incurred in connection with litigation brought by EPIC against the state. Among other things, the EPIC litigation helped preserve old growth redwoods that would otherwise have been cut down. The images illustrate what was at stake. Anderson and LaMalfa would have liked to see the redwoods go, and the way they put it, EPIC is “trying to get attorney fees from the taxpayers for … putting Californians out of work.” They claim that the taxpayers shouldn't be “footing the bill for lawsuits against the state.”

The Senators’ quarrel is actually with something called the “private attorney general doctrine.” California Code of Civil Procedure 1021.5 says that if a governmental agency is supposed to be protecting our natural resources, and if it doesn’t do that, and if private attorneys have to go to court to make the government protect our resources, and if the attorneys win in court, then the government has to pay the attorneys’ fees. That seems fair to me, and it is the law. It’s not about Democrats and Republicans!