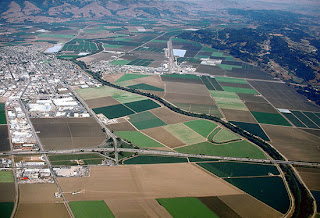 This coming Wednesday, the Watsonville City Council will decide whether or not to promote the conversion of the significant farmlands around the City to more urban growth. When I first became active in public life in Santa Cruz, the Mayor of Watsonville asserted that the City should stretch "from the mountains to the sea." It appears that this idea is still motivating City officials.

The City's current Mayor (like former Mayors) would like to get approval to convert economically productive farmlands to make those lands available for some sort of regional shopping facility. Presumably, the Mayor thinks that this would make the City better off, rather than worse off.

I wonder about that.