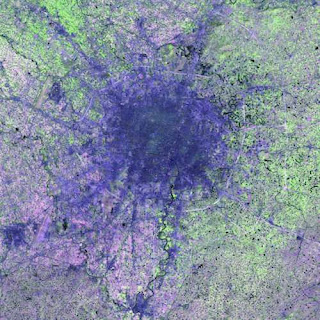 The image here (which may look like a cancer stain) is from NASA, and shows Chengdu, China in the year 2000. Click right here to visit the website featuring this picture. The website article is headlined, "Runaway Urban Growth Threatens Global Environment."

"Runaway growth," in other words, is not considered a good thing, at least from an environmental perspective, and since we all ultimately depend on the "environment," the natural world that sustains all life, "runaway growth" just isn't good for us. Back in the 1970's, in Santa Cruz County, when Santa Cruz County was the fastest-growing county in California, the public objected to "runaway growth." That was the way we described the problem that our environmental and growth management efforts were meant to address.

In the Wednesday, February 8th edition of the San Jose Mercury News, the term "runaway growth" was used in a different context, and it caught my eye. Facebook is soon going to be selling its stock publicly, and according to the article, "Facebook sees slowing growth." Stock analysts have noted that the days of Facebook's "runaway growth" are "apparently over," and while this is not an automatic reason not to buy the stock, it is clearly a concern for the analysts.

Here's my question: if economic success is dependent on the kind of "runaway growth" that destroys our environment, and if our lives ultimately depend on that environment, is "economic success" (at least as currently defined) really that good an idea?