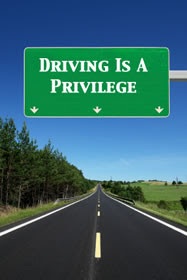 I seem to remember that the administration at Stanford University was quick to remind students that attendance at Stanford is "a privilege not a right." I have searched the currently available online version of the Fundamental Standard, which is where I thought I might find that language, and while the idea is there, the exact wording is not.

At any rate, authority always wants to make this basic point: what are often believed to be essential "rights" may actually be, legally speaking, nothing more than "privileges." Driving, for instance, is such a privilege. That is a central message on the DUIAttorneys.com website, from which the image here was taken.

In our system of democratic self-government, with a few constitutionally-established exceptions, we are allowed "privileges," legally speaking, and have few inherent "rights."

By the way, since corporations are considered persons (legally speaking), that means that they, too, operate on the basis of privileges; they have no "rights." It's about time the authorities took away some of those privileges, don't you think?

And remember, in our system of democratic self-government, "we" are the authority.