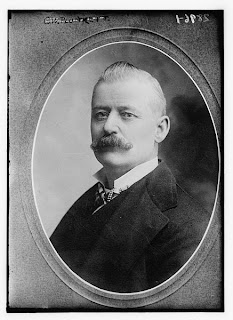 I remember marveling at the book, Plunkitt of Tammany Hall. That's Plunkitt in the picture. The book's worth reading.

If you want to buy the book, click on the link. It's very inexpensive. If you want to read the book for free, you can do that online.

George Washington Plunkitt espoused (and practiced) a system of "honest graft." And politics made him rich. Think about it; not much has changed. There are lots of those 1% folks in the United States Senate (and in the House), and lots of them became much wealthier after, and not before, they entered into elected office. Not a lot of surprises there, and not much change from the days of Plunkitt.

What I best remember of the book is the pitch it made for a politics that actually delivers direct and tangible benefits to those who work to make a political victory possible. Wikipedia explains it this way:

The positive side of machine politics, as Plunkitt saw it, was the closeness between political bosses and their constituencies. He cites how Tammany bosses such as himself would assist the poor of New York in immediate and necessary ways (such as by providing emergency loans) while others, such as social reformers and the federal government, would only push for long-term improvements in the situation of the urban poor. Similarly, he argues that the machine listened to and defended the poor while others regarded them from a distanced, patronizing point of view. Thus, Plunkitt regarded the fragmented and independent format of machine governance to be the most perfect form of urban administration possible.

If politics doesn't "pay off" for those who work for a candidate or a party, if things don't get appreciably better for them because their candidate or party won, then those people aren't going to get engaged next time around.

That's one of the problems with our politics today. There isn't any immediate correlation between winning the election and getting something you want as a result. That's discouraging. If President Obama is facing a difficult fight for reelection, right now - and I have to believe he is - this foundation principle of politics may be one of the reasons.

Those who work to win elections expect (and deserve) to get something good for their labors. And thinking they got something good is probably more important than actually getting it.