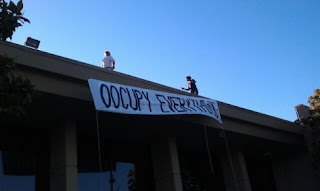 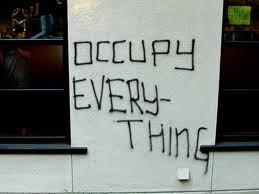 The "Occupy Everything" sign on the right is from Saint Louis. Click here, or on the image, to visit the website from which I got the picture.

The other "Occupy Everything" image is from Santa Cruz. It shows a large banner on a former bank building that was occupied for several days by a group that called itself "Anonymous Autonomous." That group is, or was, loosely affiliated with the Occupy Santa Cruz movement.

I have been following the various manifestations of the Occupy movement from the beginning of the actions mounted by Occupy Wall Street in New York City. I haven't yet showed up at a General Assembly anywhere, nor have I yet brought my sleeping bag down to the County Building, the nearest local location. I have been thinking about how to get engaged, however, because I definitely count myself as part of the 99%, and I want to be directly and personally involved in helping to bring a different and better brand of politics to this country.

An article in the Tuesday, December 5th edition of the San Francisco Chronicle talked about how a couple of Bay Area residents helped kick off Occupy Wall Street. That article led me to a fascinating website (PuppetGov - "Occupy Together"), that puts the Occupy movement in a global perspective.

I like the idea presented by Micah White, given credit in the Chronicle for being an early Occupy strategist. Looking ahead, he says:

What will be new is the marked escalation of surprise, playful, precision disruptions - rush-hour flash mobs, bank occupations, 'occupy squads' and edgy theatrics . . . And we will see clearly articulated demands emerging ... and perhaps even the birth of a new, left-right hybrid political party that moves America beyond the Coke vs. Pepsi choices of the past.

We will regroup, lick our wounds, brainstorm and network all winter. We will build momentum for a full-spectrum counterattack when the crocuses bloom next spring.

Anonymous Autonomous has just provided, in Santa Cruz, and example of what White is predicting for the future. If his forecast is for next Spring, Santa Cruz may be ahead of the curve. I am planning to "stay tuned" and to "get ready."