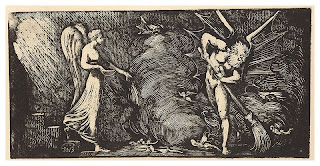 The image is from William Blake, Man Sweeping The Interpreter's Parlor.

According to A Blake Dictionary: The Ideas and Symbols of William Blake, Paul Bunyan has interpreted this drawing as follows: "the parlor is the uncleansed heart; the man who raises the dust is the Law, which only revives and increases sin; the maid who allays the dust with her sprinkling is the Gospel." To the extent that this is an accurate description of what is going on in the drawing, which Blake made in 1822 as an illustration for Bunyan's Pilgrim's Progress, not much has changed since that time. While all that sprinkling is probably helpful as a palliative, it doesn't seem to be eliminating the basic problem depicted.

This posting did not actually start out to mention William Blake, Paul Bunyan, or the Gospel. It's about a book review by Cathy Gere, published in the December 5, 2011 edition of The Nation. The book reviewed is Who's In Charge? Free Will and the Science of the Brain. Michael Gazzaniga, author of the book, is a professor of psychology at UC Santa Barbara.

According to the review, it is Gazzaniga's postulate, based on research done on divided brains, that "one of the modules in the human brain should go under the name of the 'Interpreter.' This system - located in the left hemisphere, along with the speech center - is what concocts a coherent narrative out of all the brain's activity."

The review explores the reality, or not, of what we often call "free will," and cites Gazzaniga to the effect that the decisions that we think are made in advance of our actions are actually best thought of as "rationalizations" (or "interpretations") because the actions we take are actually already completed before our brains have made the "decision" we think has preceded the action. We act on a "reflex" basis, in other words, and our "decisions" to act are nothing more than "a story we tell ourselves to make sense of [these] reflex actions."

I have a comment about this idea, in view of my "two world hypothesis." However, since I have imported William Blake and Paul Bunyan into this commentary, as I looked for an illustration for a posting titled, "The Interpreter," let me make a theological comment first.

If "The Interpreter" is the part of our human brain that tries to tell us what things mean, and essentially "lies" to us about the nature of reality and our actions, then this concept that we might need to do some "sweeping [of] the Interpreter's parlor" has a significant theological insight to communicate. At least, that's my impression.

When I think about the Gazzaniga thesis in the light of the "two world" hypothesis, it strikes me that the "reflex actions" that Gazzaniga discusses are actions that are part of the world of Nature. They are, exactly as everything else is in that world, determined by "laws" over which we have no control. Our biological being is not something that we have created ourselves, and its behavior, as part of the world of Nature, is not susceptible to human action or decision. In other words, what Gazzaniga is discovering through his application of the scientific method to an exploration of how the human body works, and to how other bodies work (rats, mainly, I gather from the review of his book) results in a discovery of nothing different from what one would expect. What happens in the world of Nature is ultimately determined not by human beings, but by the laws of Nature, since the world of Nature is a world that human beings did not create.

Free will, in other words, does exist in the human world that we create. Within the world of Nature, we are just as much subject to the laws of Nature as Gazzaniga's experimental rats.

My point? Let's not get confused about which world is which.