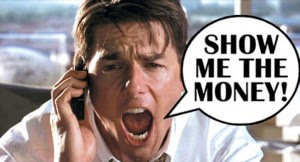 “Show me the money!” is a famous line from a well-regarded movie, Jerry Maguire. The phrase has resonance in lots of contexts, and certainly in the context of land use and transportation policy.

People hate being stuck in traffic. Elected officials, at all levels, hear about this problem all the time, and while the problem comes from poor land use planning, the “solution” most often suggested is to build more roads. Transportation planners have noted that building new roads actually “induces” new demand, so that the road-building strategy doesn’t actually work. The new congestion-free roadway stimulates more people to get into their cars, and the final result is the same old level of congestion, but with another lane of vehicles now stuck in the jam.

There are obvious environmental impacts associated with road-building, but the difficulty most often encountered is aptly identified by that line from Jerry Maguire: “show me the money!” Building roads is fantastically expensive, so how would we even pay for that?

In California, State Senator Darrell Steinberg, who also happens to be President pro Tem of the State Senate, wants to allow regional transportation agencies to raise money to reduce congestion by imposing a per-gallon fee on local fuel purchases. All such increases would require approval from a majority of local voters, and the money raised is reserved for “transit capital, operations, and maintenance costs; bicycle and pedestrian programs and projects; programs and projects that would demonstrably reduce the region’s rate of growth from 2005 levels in vehicle miles traveled by single-occupant vehicles; conversion of high-occupancy vehicle lanes to high occupancy toll lanes or other variably tolled express lanes, capital improvements relative to maintenance, safety, and rehabilitation of state highways and bridges …, and administrative costs."

Senator Steinberg's bill, SB 791, is currently in the Assembly and is likely to pass, and at least one environmental group thinks that this would be a good idea. Personally, I am not so sure. My experience convinces me that transportation agencies will always choose road building over non-road building solutions to congestion problems, and I am afraid that SB 791 would provide an opportunity to shift monies to road building that are not now available for that purpose. Again, because of the "induced demand" problem, new roads actually make things worse, not better. A successful approach must be based on increasing the "use efficiency" of our current transportation infrastructure.

In shorthand, we need to learn how to share!