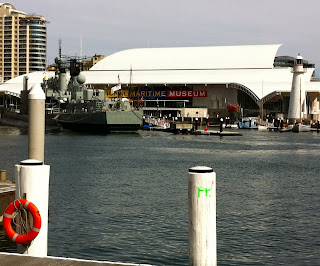 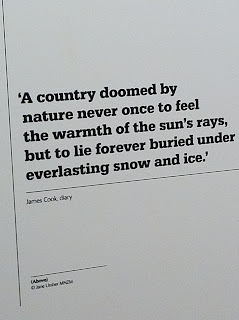 I have not yet been to the Antarctic. It's the only continent I've missed. The closest I've come was an exhibit I visited in Sydney, Australia, at the National Maritime Museum (pictured). This was a wonderful place. The special exhibit focusing on the last expedition of Captain James Cook was superlative. One of the placards, pictured above, quoted Cook to the effect that the continent was destined to "lie forever buried under everlasting snow and ice."

The exhibit itself indicates that Cook was just as bad a prognosticator as he was a planner. Seeking to be the first to reach the South Pole, Cook and several others perished in the Antarctic largely because of Cook's failed efforts to plan well for the hazardous venture upon which he had embarked.

Cook's prediction was also apparently wrong. Stunning video explanations from scientists, part of the exhibition at the museum, testify to fact that the Southern Antarctic Ice Shelf will rapidly disappear, within this century, as a consequence of human-caused global warming.

Meanwhile, the President of the United States and other policy makers around the world are spurring on corporate efforts to discover, capture, and burn even more hydrocarbon fuels.

As with Cook, these people are not doing the right kind of planning for the situation we all now confront.