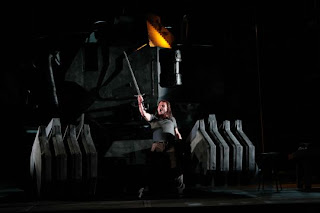 Siegfried is episode number three in Wagner's Ring Cycle. Or, for those wanting more complexity, it can also be described as episode two in Der Ring des Niebelungen, since Das Rheingold, which comes first, is considered as a "Prologue" to the three subsequent operas. Taking the series as a whole, though, which is the way to sign up to see it, Siegfried comes third.

Siegfried is a mortal man (though with a pretty nice lineage from the gods: Wotan, the "king of the gods," is his grandfather). As a mortal man, who knows no fear (which is nice), and who is pure of heart, with no avarice for the dominating power of the golden ring, and whose major preoccupation is love (sex is definitely associated), Siegfried has the happy task of winning the woman and conquering the monster who has been hiding the ring. Things are looking up!