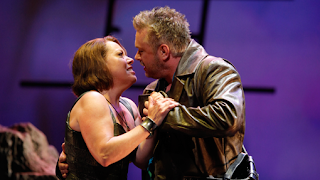 The fourth and final opera in Richard Wagner's Ring Cycle is Gotterdammerung, or The Twilight Of The Gods. The image is of Brünnhilde confronting Siegfried. Here's a synopsis of the story furnished by the San Francisco Opera:

Siegfried gives Brünnhilde the ring as a token of their union and sets off for new adventures. He meets the self-serving siblings Gunther and Gutrune and their half-brother Hagen. Seeking the ring, Hagen uses a potion to trick Siegfried into abandoning Brünnhilde, who joins him in plotting revenge. Hagen murders Siegfried, and Brünnhilde, understanding too late the deception, orders a funeral pyre built for Siegfried. As she strides into the fire, the flames rise to destroy Valhalla, the Rhine overflows its banks and the ring is returned to its rightful owners, the Rhinemaidens. The era of the gods is now over.

In the production presented by the San Francisco Opera, a new ash tree is planted, and the order of the world is presumably restored.

Wish it had been. The gods are gone. We do know that. But our current behavior, in our human world, reflects the foolishness of the gods from the opera, who sought power at the expense of both love and nature.