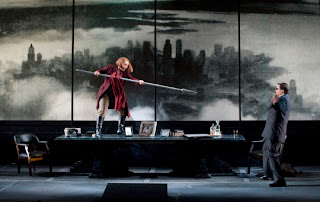 In episode one of Richard Wagner's Ring Cycle, Das Rheingold, the golden treasure of nature is taken from the river. Love is renounced in a quest for the power that will give the wearer of the golden ring forged from the stolen treasure the ability completely to dominate the world.

Even before that, the god of gods, Wotan, has cut into the Tree of Life, to shape a spear that gives him invincibility.

By episode two, The Valkyrie, it's easy to see the result (pictured). This image is from the recent performance given by the San Francisco Opera. From his castle in the sky, Valhalla, the construction of which was paid for with the stolen gold, Wotan can look down on a dirty and degraded world.

What happens next? Two more operas are to come. And a lot more trouble is in store!