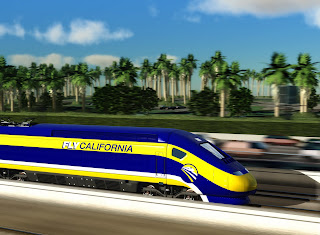 Roelof van Ark is the Chief Executive Officer of the California High-Speed Rail Authority. I have been doing quite a bit of work on high-speed rail, on behalf of the Planning and Conservation League Foundation, which is working together with the Community Coalition on High-Speed Rail, a nonprofit group based on the San Francisco Peninsula.

As it turns out, the current plans for high-speed rail in California may not be the environmental boon that many naturally suppose that high-speed rail must be. There is a rather formidable body of evidence, in fact, that the project currently being planned by the Authority is a "boondoggle," not a blessing. For one thing, the Authority's preferred plan is to build an elevated, freeway-like structure right through the middle of some of the most livable communities in the state, including Menlo Park, Atherton, Burlingame, and my old home town, Palo Alto. I've been involved, through CC-HSR, with community-based efforts to make sure that any project ultimately constructed be "done right," or not done at all. That generally would eliminate the "freeway structure option."

State Senator Joe Simitian, who represents areas in San Mateo, Santa Clara, and Santa Cruz Counties, has taken pretty much the same "do it right" position. He is a capable and experienced legislator, who is the head of the budget subcommittee in the State Senate which oversees the high-speed rail project. Up until recently, it wasn't completely clear what "do it right" meant to Senator Simitian.

As of April 18th, we now know at least some of the parameters that Senator Simitian thinks will define a project that is "done right." On that date, Senator Simitian made a joint statement on high-speed rail with Assembly Member Richard Gordon, a State Assembly Member who represents areas in San Mateo County, and heads the State Assembly budget subcommittee which oversees high-speed rail issues, and with Congress Member Anna Eshoo, who also represents areas in San Mateo, Santa Clara, and Santa Cruz Counties.

In short, these three legislators have told the California High-Speed Rail Authority, and its Chief Executive Officer, Mr. van Ark, that the Authority will not be permitted to build an elevated freeway-like structure through communities on the Peninsula, and that the Authority will not be permitted to do any significant widening of the existing Caltrain right of way, either, if that right of way ends up being used for high-speed rail. The links above are to the joint statement. From my point of view, this was a very welcome announcement of a "minimum standard" which the Authority will have to meet on the Peninsula. The statement sets a definite "bottom line" for "doing it right."

Giving some well-deserved credit to Senator Simitian, Assembly Member Gordon, and Congress Member Eshoo is a sufficient reason for me to write about their recent joint statement. What prompted this posting, however, was something else: the appearance of Mr. van Ark before the Senate budget subcommittee headed by Senator Simitian. Here is a link to an audio recording of the subcommittee hearing held on Thursday, April 28th.

The entirety of the subcommittee consideration of the high-speed rail project is of interest, but what most struck me was an interchange that took place about 51 minutes into the discussion, and right near the end. Senator Simitian, chairing the hearing, told Mr. van Ark that the subcommittee would be continuing its work on high-speed rail issues at its next meeting, set for May 5th. He said: "Can I have your commitment that you'll be here?" He had to ask three times, and he never did get that commitment from Mr. van Ark. As the Senator so correctly noted, the California High-Speed Rail Authority wants the State Legislature to appropriate $200,000,000 to the Authority for the next year, and the Senate budget subcommittee plays a key role in deciding whether that request should be honored or not.

I've been a lobbyist in Sacramento. I have some advice for Mr. van Ark: When the elected officials who will decide on your budget invite you to a meeting, GO.