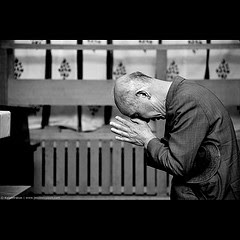 Check the picture. It's a great depiction of deference, isn't it? Does this make you think about the Judges you know? Well, maybe it should! Out of the image, and to the left, are the politicians you can't see, but to whom the Judges bow.
On Friday, October 8th, the Court of Appeal of the State of California for the First Appellate District handed down a decision in Sonoma County Water Coalition v. Sonoma County Water Agency. This case shows why politics is so important (and why the courts are less so).


The trial court determined that the Sonoma County Water Agency did not follow the law, as it prepared a revision to its statutorily required Urban Water Management Plan. But the agency appealed, and the Appellate Court reversed, upholding the agency's action. The citizens' group won in the trial court, but it lost on appeal. "Deference" is the reason why.

As this very recent decision makes clear, the courts are required to "accord deference ... to the Agency." In other words, the courts are not supposed to "weigh conflicting evidence and determine who has the better argument." Did you think that this is what the courts were all about? Many people do.

But it's just not so!

So, just remember this the next time you vote. The "checks and balances" that are provided by the courts are not very strong. The courts will only set aside the decisions made by political bodies when there is no substantial evidence to uphold their factual conclusions, or when they don't proceed in the "manner required by law." That's the basic rule.

That's why it's so important to elect people who will truly represent the public, not special interests and not the bureaucrats. Elected officials take our power - that is exactly what it means to be elected: to be given the power to "represent" the voters, to act in their place.

Having been given our power, elected officials use it. They do what they want. And if we don't like what they do, our remedies are mostly political, not judicial.

This is just a word to the wise in advance of the upcoming elections!
To Subscribe Just Click This Link