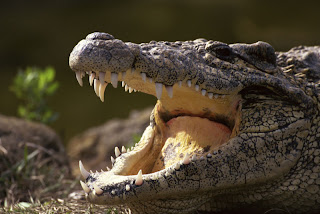 Because I went to The New Yorker Festival earlier this month, I am thinking, now, of crocodiles.

The Street of Crocodiles, by Bruno Schulz, was discussed by Jonathan Safran Foer, who is cutting into the book, removing words, to release a new story of his own. That new book is coming soon. Werner Herzog, who showed his film, Cave of Forgotten Dreams, included crocodiles in a "Postscript" to this documentary on the Chauvet Cave.

In both these treatments, the book and the film, the crocodile is more "symbol" than reality. There is, in the world of nature, upon which we ultimately and utterly depend, a voracious power that can rend our plans and projects all to shreds.

See the film. Read the book. Be advised.