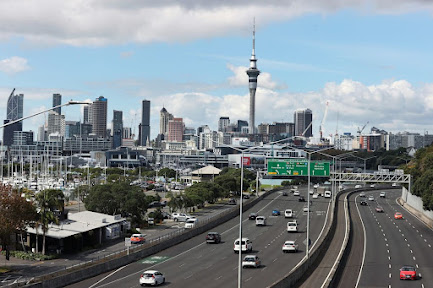 That is Auckland, New Zealand, pictured above. The picture reminds me of my trips into San Francisco on Highway 101. There are really some striking similarities in the way the cities look, seen from this perspective. I don't know what they call the outsize tower in the middle of this photo of Auckland, but it seems to dominate the Auckland skyline the way the Salesforce Tower dominates the San Francisco skyline.
At any rate, my blog posting today is not about Auckland (or San Francisco), and it's not about office towers and their priapic city displays, either. Auckland is the most populous urban area in New Zealand, and so this picture seemed suitable to draw attention to a blog posting prompted by a recent Wall Street Journal news story about New Zealand.
Specifically, I am referring to an article about how New Zealand is planning "to require online platforms like Alphabet Inc.'s Google and Facebook owner Meta Platforms Inc. to pay news publishers for content."
Click the link to read the entire story (the WSJ paywall permitting, of course). I think it's good that New Zealand is going to try to make the giant online platforms pay local newspapers and other news sources for "the news" which we now read, increasingly, only on those online platforms.
What interested me most about the article, though, was not so much the specifics of New Zealand's plans to make the giant online platforms compensate those who actually produce "the news." I got to thinking about the "principle" involved. The "principle," in my mind, is that those who actually help produce something that has value should be compensated for the value they produce.
What about workers in general? We have recently heard about the outsize profits of the railway corporations, as their workers go on strike. The oil companies are in the same position. The incredible profits that have gone to the giant corporations would not have appeared without all the workers who work for those companies. Yet, the "workers" don't get to share, very significantly, in the business profits that their labor has helped create.
Here is a quote from the article about New Zealand's plans to make the online mega-platforms pay for "the news" that they provide to those who visit their sites (and who, by visiting those online platforms, to get "the news," create big profits for the platforms):

“It’s not fair that the big digital platforms like Google and Meta get to host and share local news for free,“ Mr. Jackson said Sunday. “It costs to produce the news, and it’s only fair they pay.”
Like legislation elsewhere, New Zealand’s proposal would allow Google and Facebook to negotiate with publishers without government intervention. But if no agreement is reached, then the law would plot out a mandatory negotiating process.

Recognizing the massive income and wealth inequality in the United States, isn't it about time that we set up just such a system for workers in general? In other words, because we are "all in this together," it is appropriate for all major corporations to be sure that their workers get a fair share of the profits that are generated, ultimately, by the work those workers do.
The New Zealand proposal allows an initial negotiation, but with the government stepping in to make the allocations if the workers and the corporations don't agree what's "fair" to all involved.
Sound good? Worth thinking about, in my opinion.
Worth working for!
To Subscribe Just Click This Link
Image Credit:
https://www.bloomberg.com/news/articles/2022-04-20/new-zealand-inflation-accelerates-to-fastest-pace-in-32-years