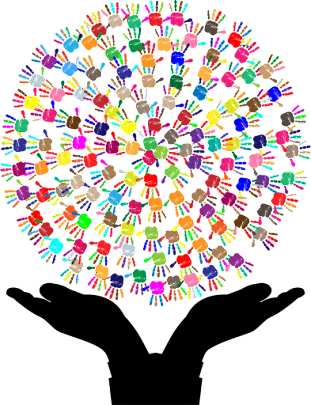 Mark McCaffrey, it appears, may be one of those "tech bros" we have heard so much about, though it is possible that Wired Magazine is correct that the "tech bro" term is overused. If you click the link to McCaffrey's name, above, the information provided identifies McCaffrey as the Chief Financial Officer of GoDaddy, which claims to be "the world's largest and trusted domain registrar that empowers people ... with creative ideas to succeed online." This very blog, in fact, comes to you thanks to the efforts of GoDaddy (not to diminish my own efforts, of course).
At any rate, the link to McCaffrey's name alerts us not only to his corporate credentials, but includes both a "biography" and a statement of McCaffrey's "net worth." For me, at least, celebrating a person's "net worth" is always a bit offputting, but I am giving McCaffrey the benefit of the doubt, because I want to point you to one of McCaffrey's own blog postings, titled, "Powers of 10 to the People!"
McCaffrey's point, in that posting to his own blog, is that we often fail to understand how actions that immediately impact only a few can "scale up," and have consequences going far beyond what might be immediately apparent. Here is how he begins the discussion:

As individual human beings, we literally contain multitudes. We are, indeed, made of stardust, being billions-of-years-old carbon-based beings. My body (and yours, dear reader) is made up of tens of trillions of cells and bacteria and contains hundreds of trillions of viruses.

By contrast, we Homo sapiens are far less numerous than bacteria or viruses — there have only been around 100 billion of beings we call humans who have ever lived. But collectively we — 7.8 billion heading toward 10 billion by 2050 — have become a major force of nature, with some of us having a supersized impact on the Earth’s climate and ecosystems that sustain us; the “energy opulent” top 10% of carbon emitters, including most people in the US and Western Europe, consume about half the world’s energy.

As lone individuals and mere mortals, it is often difficult to know how to address global challenges, given the fractal-like complexity of life and all the entangled levels and layers of systems and scales that we are embedded in.

Moreover, nations of the world, who have all committed to addressing climate change and related challenges, have with few exceptions been unable or unwilling to follow through on their commitments. As one young observer recently pointed out: “The emperors are naked. Every single one. It turns out our whole society is just one big nudist party.” Perhaps nations, whether large or small, are inherently the wrong scale to solve these 21st century challenges.

Given the global climate of confusion and the urgency and frustration many of us as individuals feel, what new tools or insights are available to help us address the systemic challenges of climate change, human rights, inequality and a global pandemic?

The Powers of 10 framework of people may help during this time of transformation. It is very simple — the ten orders of magnitude (meaning zeros added starting with the number one) between a single individual and everyone else on the planet.

As a convenient frame, it allows us to be less dependent on vague, relative terms of population size and scale like “nation”, “state,” “region”, “community” by focusing on the number of people involved.

And, the Powers of 10 figures can help convey the unity of humanity and the imperative to put aside what separates us and divides us for the greater good, namely the survival of the species (emphasis added).

McCaffrey's bottom line message is pretty clear. The actions of even one person (you or me) can have impacts that are exponentially greater than we might imagine, and that if we are serious about dealing with the global warming crisis that is putting human civilization in danger we need to get involved ourselves - individually, that is, not waiting around for some "government" to solve the problem.
This suggestion, the way I read it, is the exact same message repeatedly conveyed by Dr. Katharine Hayhoe, an environmental scientist who has been featured in my past blog postings more than once. It is also consistent with my often-repeated remark that if we want democratic self-government to work, and to solve the problems that need to be solved, then we need to get involved ourselves.
To the degree that we have concluded that individual efforts are fruitless, that's just not true. From Hayhoe, to McCaffrey, to Patton - and let's throw in Michael Jackson, too - you are hearing the same message.
Do we want to change the world? Start changing what WE do (each one of us). Let's not wait around for "the authorities" to do it for us!
To Subscribe Just Click This Link
Image Credit:
https://medium.com/@markmccaffrey_90684/powers-of-10-to-the-people-410a334004db