#364 / Rescued From The Giveaway Pile 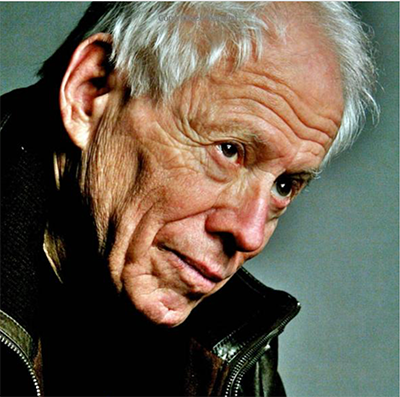 That is a picture of Harry Berger, Jr., up top. Berger was an internationally recognized scholar and founding faculty member of UC Santa Cruz. He was known for a wide-ranging and interdisciplinary approach to scholarship, going "far beyond traditional academic boundaries." The UCSC website tells us that Berger died on March 12, 2021, at age 96. Click the link, above, for more about Berger.
In our house, lots of books are on display, and certain books are culled, from time to time, as our bookshelves bulge, and these books are then made available to others, often by way of their deposition in various "Little Free Libraries" around town. Generally, I do the depositing.
Recently, as I prepared to head out on a weekday walk, I pulled some books from the "giveaway box" maintained in a hall closet, intending to distribute them to Little Free Library boxes that I had noted were relatively unpopulated with books worth reading. I found, upon examination, that one of these books was titled, A Grammar of Motives. This was clearly an "old" book, hardbound, with a well-worn cover. It was published in 1945, when I hadn't yet learned to read.
In fact, I could not remember ever having seen this book before, and I don't give away books (any books) without a pang of regret. I certainly don't give away books about which I know nothing, and which might be of some inspirational or intellectual value. What was this book all about?
Well, when I opened up A Grammar of Motives, I quickly deduced why I found the book unfamiliar. This was a book by Kenneth Burke, but it was was once owned by Harry Berger. The evidence, penciled in on the first flyleaf, was Berger's own notation: "Harry Berger, 13 Rose St., Hamden, Conn."
Berger, I hasten to add, had never seen fit to discard this book while he was alive (obviously carrying it across country with him, from Connecticut to Santa Cruz. (Berger got both his B.A. and his Ph.D. from Yale). Berger still had this book when he died, and then, in what might be thought of as a kind of final gift to UCSC, left directions that after he died (and not until he died) faculty members should be invited to come into his home, and to take away any books that might appeal. My wife, I quickly remembered, had taken this tour, and had obviously come away with A Grammar of Motives.
I decided that this book, surviving from 1945 to 2022, should not be so casually passed on, and I have now added Burke's book to the considerable pile of unread books on a lovely table in my own, home office: 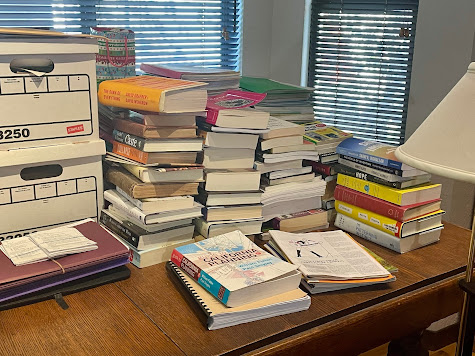 I have also dipped into the book enough to discover what it is all about, and this has confirmed my decision to try to read it before I am placed in Harry Berger's situation, and other people are browsing through my bookshelves, picking out volumes by Søren Kierkegaard, Hannah Arendt, and other favorites.
Burke, the author of A Grammar of Motives, is "one of the most unorthodox, challenging, theoretically sophisticated American-born literary critics of the twentieth century." At least, that is what Wikipedia and The Johns Hopkins Guide to Literary Theory and Criticism say, claiming that Burke's work "continues to be discussed by rhetoricians and philosophers." Presuming that I do, in fact, get to read the book while I still can, I have no doubt in my mind that I will be discussing it, myself, by way of a future blog posting, right here.
A Grammar of Motives is intended to help us find answers to the question, "What is involved, when we say what people are doing and why they are doing it." Burke states that "an answer to that question is the subject of [the] book." I had an immediate hunch, just glancing at the first page of the "Introduction," that getting Burke's thoughts on this question is likely to be helpful. He says that in order to know "what people are doing and why they are doing it," we need to make an examination of: (1) Act, (2) Scene, (3) Agent, (4) Agency, and (5) Purpose.
I have a particular appreciation for lists of five, and I am looking forward to discovering what Burke has to say. I think that my good deed for the day (with myself, most directly, as the primary beneficiary) is to have rescued Harry Berger's book from the giveaway pile.
I'll keep you posted when I know more!
And if I don't, stay tuned for an opportunity to browse through my own books, sometime in the future, because I think that Harry Berger's idea of what to do with books, when you're dead, is a really good idea!
To Subscribe Just Click This Link
Image Credits:
(1) - https://news.ucsc.edu/2021/03/harry-berger.html
(2) - Gary Patton personal photo